Bachy Soletanche, in Joint Venture with Red7Marine, carried out the piling for the Emirates Airline Cable Car that takes passengers across the River Thames from the O2 Arena to ExCeL. This £4.8m contract for the JV, was carried out for Transport for London’s Docklands Light Railway and lead contractor Mace . It was successfully completed within a fixed budget and a short programme, in time for use during the 2012 London Olympics.

The Emirates Airline London cable car links two of the biggest entertainment and exhibition venues in Europe, the O2 and ExCeL, as well as providing spectacular views across the Thames. It is Britain’s first urban cable car with a crossing every 30 seconds. Carrying up to 5,000 passengers an hour, it also provides a low emission mode of transport, cutting river crossing times to approximately five minutes.

In 2013, the project was awarded two Ground Engineering awards in the Geotechnical Project Greater Than £1m and Technical Excellence categories.

The North Station and North Compression Tower consists of 31no. 750mm diameter piles up to 45m long with 17 to 18m long permanent casings dependant on the dock bed level. The piles were constructed from a 42m by 17m spud leg barge with a BG24 piling rig.

All works close to the water, including the temporary walk way, were carried out in liaison with, and with the approval of  the Port of London and the Environment Agency. The Jack Up barge used for piling was supported by an additional jack up barge to carry craneage plus auxiliary barges to transport pile spoil, supplies and store equipment. 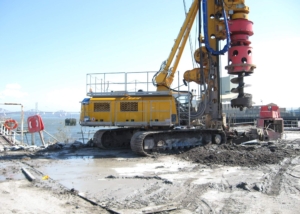 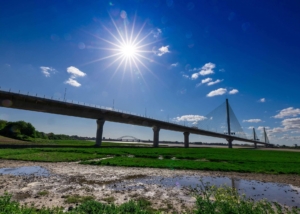 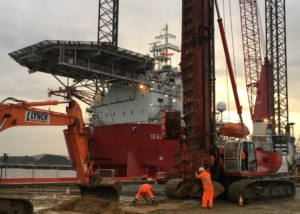 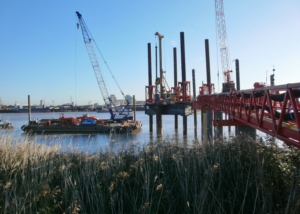