The scope of piling works comprises the installation of 96 minipiles at 240mm diameter up to 10m long for five tower bases. At each tower base, a sacrificial test minipile was installed and static load tested to three times the designated safe working load. This was to ensure the design and ground conditions were consistent with the specified requirements.

The ground conditions across the five locations were variable in nature, consisting of 1.0-1.3m of overburden, made ground, soft clay, peat, gravel deposits over a soft weathered rock becoming competent rock.

Two Klemm K709 minipile rigs were employed at separate tower bases (441 and 466) to accelerate the piling programme. The design required the piles to be embedded into the bedrock by between 3 and 5m. The bedrock itself varies in hardness between bases and also between the legs of a single base. Pile output was between three and four piles per shift.

273mm diameter temporary casing was used to support the bore in the overburden and soft rock, drilling parameters were varied to accommodate the variable strength and characteristics of the insitu rock type at the different site locations.

On reaching the designed pile length, the down the hole hammer was removed, pile reinforcement was then installed into the bore and hung to the correct TOS level, grout was then pumped into the minipile via a Colcrete 410 mixer. The temporary casing was then removed and grout was topped up as required.

The majority of piles were located in close proximity to live OHL circuits therefore special measures were taken to prevent the risk of arching. The Klemm 709’s short mast, ensured a safe working distance away from the 275kv power line.

The remote locations and ruggedness of the terrain posed a logistical challenge. From the access roads it is possible to see heavily forested Great Glen and the world famous Loch Ness, which contains more fresh water than all the lakes in England and Wales combined. The site team had to transport all the plant, equipment and materials to each of the bases, setting up a temporary compound at each. The use of rough terrain tractors and trailers, and with assistance from a local supplier, helped to overcome the access constraints and ensure all the required items were successfully delivered to site. 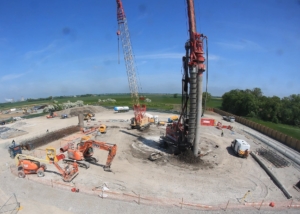 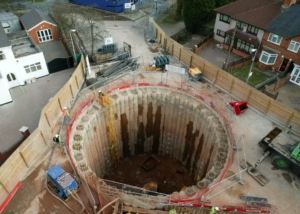 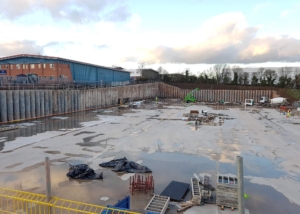 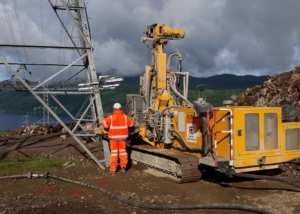