Bachy Soletanche is continuing to drive its sustainability agenda, by using exhaust emission reduction technology to reduce the environmental impact of its piling rigs and equipment.

Early in 2020, Bachy Soletanche identified the importance that reducing plant emissions has in contributing to VINCI’s ambitious targets of reducing its impact on the climate and environment.

In conjunction with Cybrand AEC Ltd, and its accredited technology partner HJS Emission Technology GmbH, the project went through an intensive research and development phase, which included choosing suitable technologies and adapting them to provide an innovative solution.

The first rig selected was Bachy Soletanche’s 2007 Bauer BG40 piling rig which is fitted with a 433kW engine originally meeting Stage IIIA standards.  This machine was selected for the trial, as it remains a key rig within the fleet but was unable to satisfy the Stage V emissions standards increasingly necessary within the UK market.  The objective of the project was to reduce the harmful pollutants from its exhausts, to comply with these Stage V standards extending the machines life, whilst at the same time ensuring that the machine can continue to operate without any practical, physical or aesthetic compromise.

Working closely with Cybrand and HJS, they retrofitted a diesel particulate filter (DPF) and a selective catalytic reduction (SCR) system to the BG40.  This technology has been adopted by others in UK and elsewhere in the world in the sub 300kW range, but Bachy Soletanche believe that this is the first application in a substantial engine of this size, 433kW. 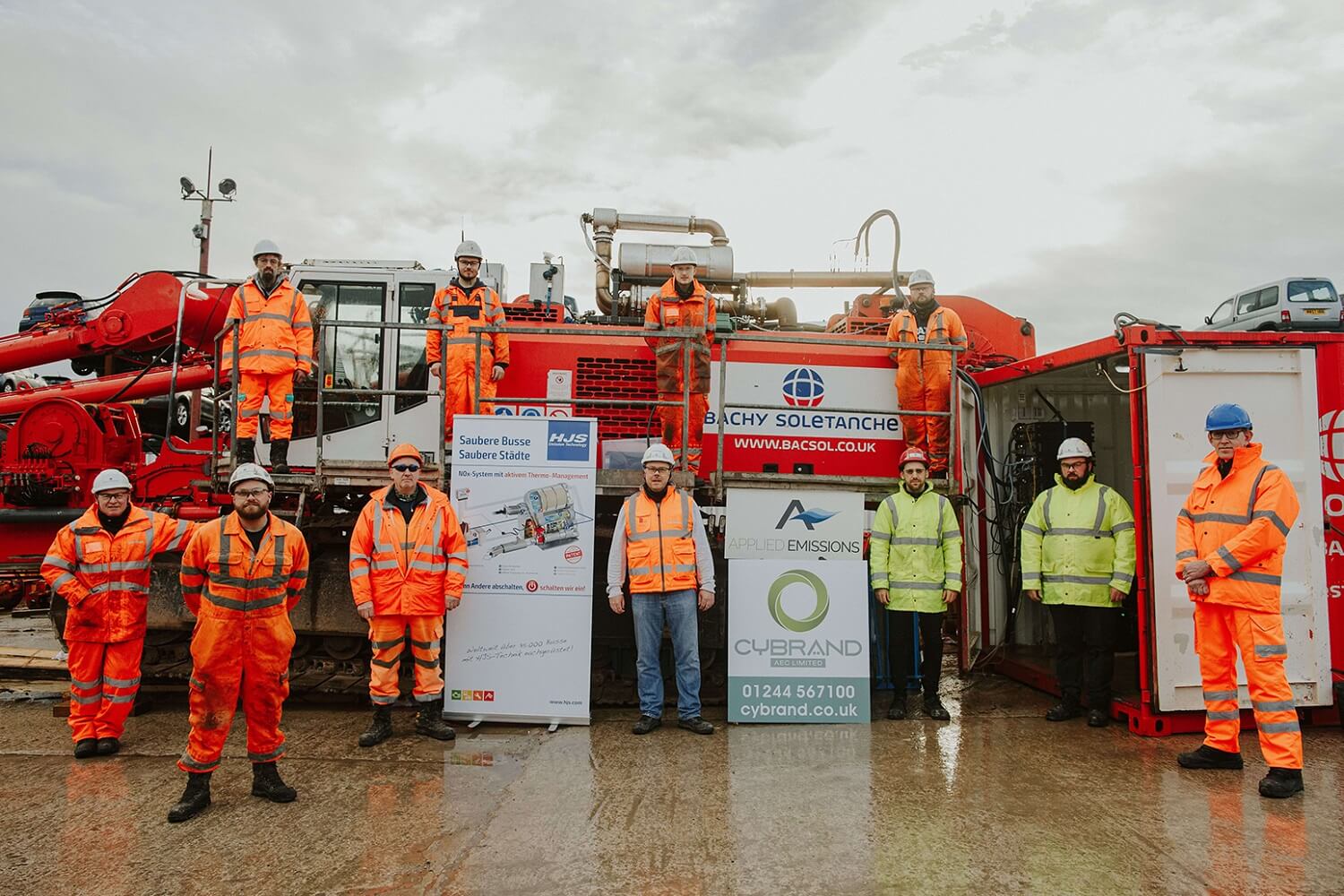 The retrofitting was completed late in the Autumn of 2020 and Applied Emissions was invited to Bachy Soletanche’s plant yard in Burscough, Lancashire, to undertake their rigorous testing procedures, as prescribed by the Energy Saving Trust.  The evaluation, completed in December 2020 by Applied Emissions, confirmed that the DPF and SCR system reduced emissions sufficiently such that the after-treatment system fitted to the machine will meet Stage V compliance.

Retrofitting this equipment has extended the UK life of the machine thus saving resources.  Rather than recirculating this rig to another part of the world to continue polluting the environment and replacing it, the process has reduced harmful emissions. Nitrogen Dioxide (NO2) and Nitrogen Oxides (NOx) have been reduced by a massive 95% and 97% respectively.  NOx can cause serious health damage to humans, including respiratory diseases. NOx is also responsible for smog and the typical brown cloud that covers larger cities and produces poor air quality. NO2 is responsible for the formation of ozone, which is a greenhouse gas, via secondary reactions with other gases.  It influences cloud formation and the absorption of carbon by plants, which in turn influences global warming.

Carbon Monoxide (CO) was reduced by 90%.  This is a pollutant that affects methane, carbon dioxide, and the tropospheric (lower atmospheric) ozone. It thus plays a role in both air pollution and climate change and is therefore regulated in many parts of the world

PM10 particulate matter has been reduced by 99%.  These are black carbon particles, found in diesel engine exhaust and are 3,200 times more damaging to the climate than carbon dioxide in the near-term and promote cardiovascular disease and lung cancer.

In addition to the good this does for the UK, the system has a world-wide application and will help reduce plant and equipment emissions in locations where stage IV or Stage V engines are not available. Bachy Soletanche is now reviewing where this initiative has other applications within their equipment fleet.  Alongside other initiatives relating to equipment emissions, this reinforces Bachy Soletanche’s commitment to reduce the impact its works have on the climate and environment as well as everyone’s health.

5 ways to wellness with our Mental Health First Aiders