Breaking The Stigma Of Same-Sex Parents

Breaking The Stigma Of Same-Sex Parents 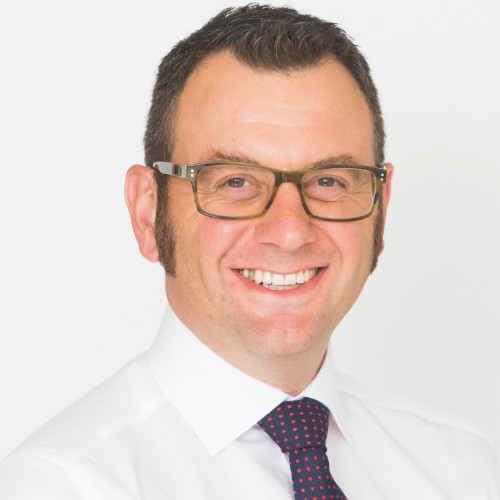 As part of our Pride-month discussions this year, we spoke to Dafydd Belshaw, Group Quality, Sustainability & Environmental Manager, about his experience of having two mums. We discuss how it shaped him, his thoughts on labels, and why we need to normalise LGBTQ+ and same-sex parents.

What is your experience with having same-sex parents?

My experience of having same-sex parents came a little later in my life; up to the age of about 21 I was brought up by my mum and stepdad – a more ‘typical’ parenting. It wasn’t until I was about 23 years old, after they had broken up, that my mum got together with her now wife, Sue. When my mum introduced me to Sue, it actually wasn’t as strange or surprising as you might expect, and I didn’t particularly question the fact that she was now with a woman and not a man.

Having said that though, my mother-in-law always reminds me that I have had a bit of a unique upbringing in that both of my parents were artists and my mum has always been involved with women’s rights organisations. My mum and stepdad also had a few friends who were in same-sex relationships and so, same-sex marriages and civil partnerships were something I had always been exposed to. Therefore, I think this enabled me to be a lot more accepting and not as surprised as others might be in my position.

I think when people become unstuck with diversity it’s when they don’t engage with it and aren’t exposed to it.

I studied chemistry and I always think about this issue in relation to the scientific concept I learnt that ‘chemicals attract like chemicals.’ People are the same in that way; given half the chance you will lump yourself together with people who sound the same, look the same and possibly dress the same. And so, if there’s someone who’s a bit ‘other’, they’re not naturally invited into your circle of friends, which is where unconscious bias comes in… which is possibly a whole new conversation in itself.

This tendency to ‘other’ certain types of people in society also reminds me a bit of the Traveller community in the UK. In a way, they’re on the edge of society and we don’t really engage with them in our day-to-day lives. For most of us, the only interaction we have with the community is the news telling us they’re a negative presence that don’t contribute to society. Obviously, that’s not true and we’ve got to understand everyone is different.

I previously worked as an Environment Protection Officer and had to investigate a Traveller family. To my surprise, the first thing they did was invite me into their home, sat me down and made me a cup of tea – straight away every single barrier or bit of unconscious bias I had went away. That’s almost what we’ve all got to do, we have to understand that as humans, we all have commonalities and people aren’t as alien as you think.

Did you ever feel any external stigma around your mum’s new relationship?

Yes, it was mainly from friends. I grew up in Doncaster and not to be too overgeneralising, but most people thought that the only way the world works was if a man and a woman are together. I also knew that one or two of my friends had big issues with gay men. To be honest, it was a conversation that was avoided rather than tackled. I was worried about being open and for a number of years referred to Sue ambiguously as mum’s ‘partner’.

I think having same-sex parents did make me more open-minded and resilient.

However, when they got married four years ago, I made a decision that I didn’t care what people thought and would refer to Sue as mum’s wife. I think the stigma element is still there a little bit, but maybe more so in my own head than in reality. Whenever I tell someone about having two mums, I always wait for them to have a negative reaction, but that’s never actually happened. It’s perhaps my own vulnerability and fear at play, as most people just kind of go ‘oh right’ and move on, there’s no fuss made of it, which is really nice. Conversely, you don’t really get questions about it either. I think people maybe feel a bit awkward and don’t know what to say so they don’t go into it.

Do you feel having same-sex parents changed your perspective on anything? Do you think you became more open-minded, resilient etc.?

The way that society is changing at the moment, my mum and Sue feel quite vulnerable being open about their relationship in public to people they don’t know. Recently there’s still a bit of a retraction of people’s openness which is a real shame. It makes it difficult when it comes to raising awareness – for instance, what Bachy Soletanche are trying to do with our conversations for Pride month – yet it’s understandable why people are hesitant to share these things.

I think having same-sex parents did make me more open-minded and resilient. I’m not sure if that’s from my upbringing, from my mum and Sue getting together, or a bit of both. I think I tend to see others’ perspectives easier, understand other people and be generally more accepting. I think some of that is thanks to my mum, who took me along with her to her Women’s Aid meetings, where I saw many different types of people and families that didn’t look like mine and were completely different.

I believe that if you’re exposed to it, you accept it. My children don’t bat an eyelid over the fact that they have two nannas because they have no preconceptions.

Kids are a lot more resilient than we give them credit for, if we tell them this is how things are or this is how things could be, mostly they just tend to accept it and get on with it, rather than arguing against it or discriminating others. 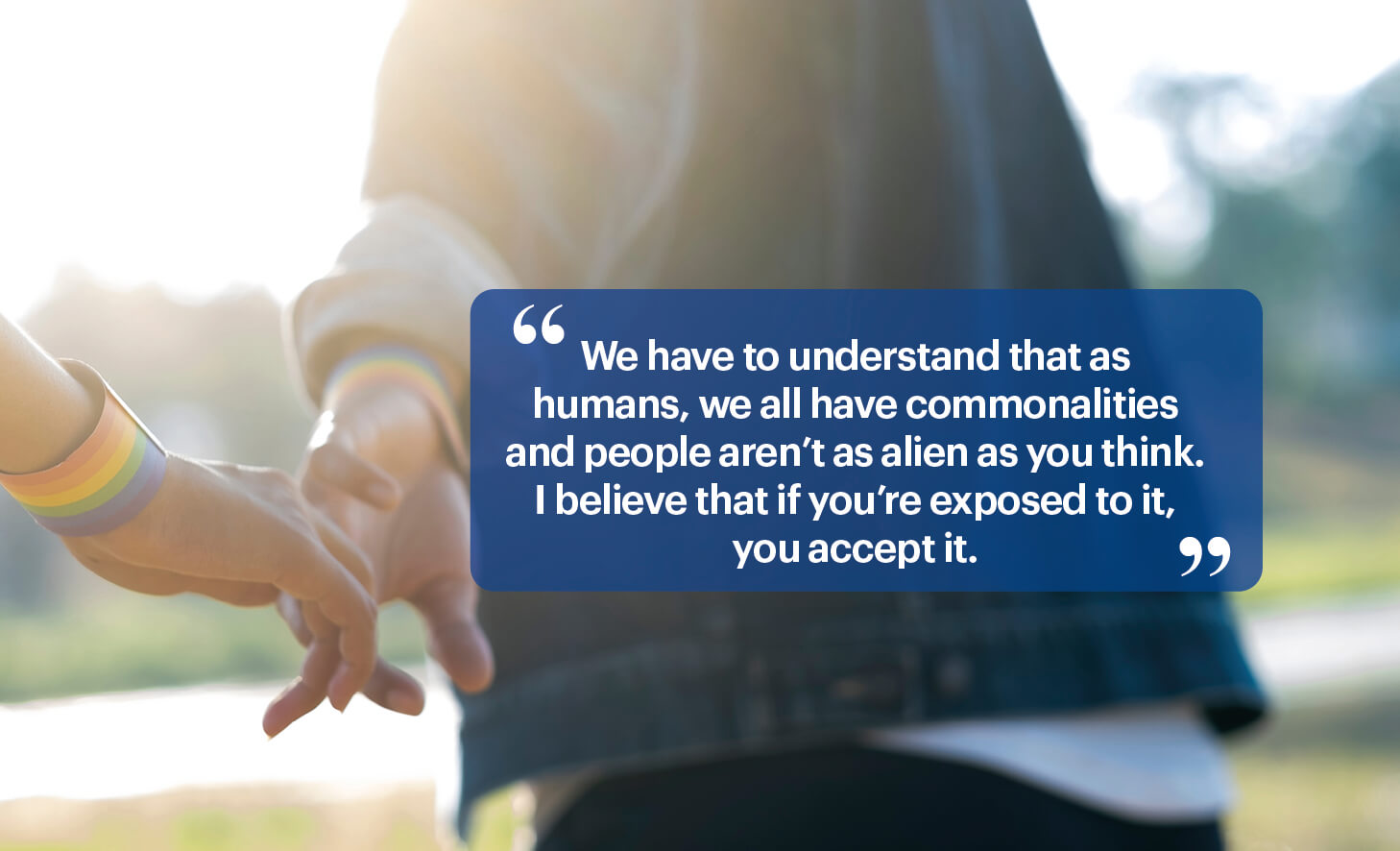 Are attitudes towards same-sex parenting or LGBTQ+ families improving? What more can be done?

I think it comes back to exposure again. Attitudes are changing, which is positive, but there is still a way to go for it to be more normalised. It could be as simple as showing videos of a young child with same-sex parents and just showing how happy that child is, because if the child is happy then what else matters? Who can argue with that? If it’s normalised, it can’t really be a problem.

A lot can definitely be done in education, schools, the media. Along with that though there is a massive hill to climb, e.g. if parents hear their young children are receiving sex education you get lots of parents protesting. In reality though, sex education at a young age is literally just teaching someone how to be a good friend to someone and what healthy relationships look like.

Maybe the label of ‘sex education’ isn’t accurate, because sex brings in certain connotations of other things. At the end of the day, if kids know how to form healthy relationships from day one then it’s going to help them and stay with them throughout their lives. Same-sex couples should be included in this education so it is normalised for children, so they know that there are many ways a family can look.

However, I do struggle with labels a bit, as I feel it can be quite ‘othering’. I know labels can be useful and a simple way of understanding things but putting too much emphasis on them can also create even more distance and alienation – it can even be used as a weapon by some.

How do you think traditional gender roles can be broken down and challenged?

It’s hard to know which should come first, but I know legislation on childcare for employees would be beneficial, such as more of a push from companies to encourage men to take more time to care for children as well, which simultaneously relieves pressure on women. I think this has to come from legislation, as companies don’t want to do anything unless they are pushed to do so.

In terms of diversity, it has to be something similar, it has to be a company asking what they can do to address the fact that the employees that make up their boards are all middle-aged white men. Again, that is a traditional stereotype that needs to be broken down and challenged. That can only really be effective when implemented by a company and when it is addressed with pressure.

Do you feel like there is more to be done to improve inclusivity?

Yes, especially on site where people aren’t as exposed to as much diversity and are mostly from similar backgrounds.

To address this, we need to be clear as a company about our direction of travel regarding Equality, Diversity and Inclusion. We need to ensure all our communication aligns with the same message, showing what we are doing continuously to try to make the workplace more diverse.

We need to have something external to attract new employees and for those that want to join, we need to let them know where we stand and that we are diverse, accepting, and trying to do better.

Other companies are doing blind CVs, where they remove anything that refers to gender, ethnicity, or age, which addresses so many unconscious biases. It’s a simple but effective change and something we could definitely do. These techniques like removing names from CVs help you to prove that you are recruiting exclusively based on skill and suitability for the role, regardless of sex, colour or creed.

Do you think there needs to be more education to break down the stigma of same-sex parenting?

Yes, definitely. The more exposure of same-sex relationships the better, although, I think that is up to the person if they feel comfortable doing so. I definitely think having more presence in the media and in schools is needed, as well as normalising the fact that relationships are all different – LGBTQ+ or otherwise. That is the key to changing and getting rid of the stigma.

In heterosexual relationships, most people have had several different relationships and each one of those is significantly different from the other and over time you understand what you do or don’t like. And that’s identical with same-sex couples, it’s simply a preference. The more people interact with same-sex and LGBTQ+ couples, the more they understand what they’re like, that they’re completely normal and just happen to like people of the same sex.

Do you have any advice to other people with same-sex parents?

I’d say when it comes to your situation, just talk about it – get over yourself and say it. I think that was the journey I went on, I accepted it, but I was more nervous how my friends would perceive me because of it. But then I just got to the point where I said screw it, it doesn’t matter.  It’s that age-old advice that ‘if they’re your real friends they’ll accept you and if they don’t then they’re not your real friends’.