World Engineering Day is here and it’s time to celebrate our amazing employees and their engineering achievements!

We asked five Bachy Soletanche employees what their favourite project has been since they joined the company and what historical engineering project they would’ve loved to have worked on.

My favourite project definitely has to be the Thames Tideway Tunnel project in London, where I’ve been in charge of the Earl Pumping Station site (EARPS) since work began there. It’s been a real standout moment in my career as it’s one of the most challenging projects I’ve ever worked on and out of all the sites, EARPS is like a geotechnical playground; we’ve covered almost every solution imaginable, including ground improvement (CSM, DSM, jet grouting), minipiling, rotary LDA piles, CSP and CFA piling. I’ve also had the opportunity to experience delivering many different solutions for the first time in my career, such as diaphragm walls under polymer fluid, jet grouting, cutter soil mixing and deep soil mixing. I even contributed to the first time that Bachy Soletanche delivered cutter soil mixing, which I was very excited and proud to have been a part of.

What’s made Tideway particularly memorable and enjoyable has been the incredible camaraderie among my team; everyone has shown such enthusiasm, positivity and good communication. This has really carried us through any challenges that have arisen… and EARPS has had its fair share of them! As the smallest site on Tideway, congestion has always been an obstacle, but there’s also high levels of contaminated ground here that have created several environmental constraints. It’s these challenges though, that have made the project so rewarding and interesting.

One of the two things that spring to mind is the Egyptian pyramids, they’re such a mystery, I would love to see how the ancient Egyptians tackled geotechnics and what foundations those pyramids are supported on! The second is the Leaning Tower of Pisa, another mysterious structure, I’d love to have been there to know the reason behind its tilt… I’m sure it was probably just poor ground investigation, but I think it would have been interesting to have witnessed what went on.

Without a doubt, my favourite and most rewarding project I’ve ever worked on has been the 2011 extension to the British Museum World Conservation and Exhibitions Centre, where I worked as Design Engineer. This was a very proud moment in my career because, in addition to this being such a cultural landmark, I invested a lot of time in proposing an alternative sustainable design that was accepted by the client. My design led to a 9% reduction in concrete and a 25% reduction in steel through reducing the number of bearing piles, resulting in significant carbon and cost savings.

The scheme was particularly complex with a deep three-storey basement that was designed in a unique cruciform shape and with a secant wall comprising an innovative combination of cased CFA and large diameter rotary piles. Due to the proximity of the adjacent museum and neighbouring residential buildings, we had to achieve a high verticality tolerance when constructing the wall. The site was also very tight in space and being in such a central urban location, we had to work hard to limit noise and vibration levels, along with employing sound logistics to work around the site’s access constraints.

The particularly challenging parts of the design for me were designing the wall piles to accommodate for the higher than usual wall movement tolerance, the temporary propping sequence, surcharge loads imposed by the adjacent properties and the tower crane loads. We received excellent feedback from the client after the project was successfully completed, especially for the carbon savings gained through my design. Sustainability has always been at the top of my mind. I believe that as designers, it’s our job to constantly be looking for ways we can optimise our designs to reduce our environmental impact and improve productivity in the way we design, build, and operate without creating unnecessary waste and harm.

For me, it would be the Sydney Opera House. Due to its waterfront location, I think it would have been such an interesting and challenging project to have worked on. Its unique shape would have added to the project’s complexity as it would have a very different loading capacity compared to a regular rectangular or square building. I would have loved to have seen what went into the geotechnical design process! 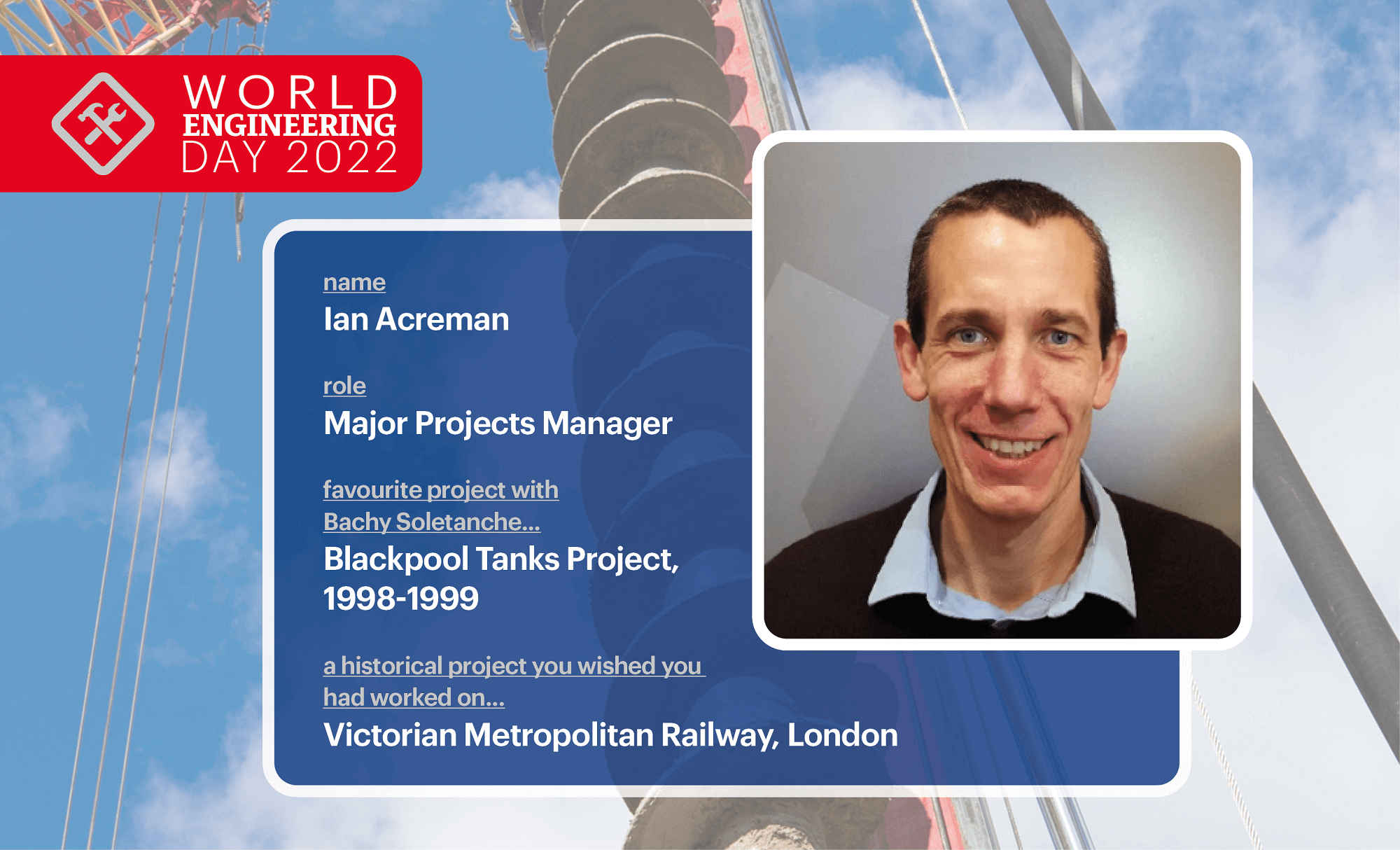 While it has been a privilege to have worked in joint venture teams on major infrastructure projects including HS2, Crossrail, the Channel Tunnel Rail Link, and the Jubilee Line Extension, my first project with Bachy Soletanche working on the Blackpool Tanks Project between 1998 and 1999 remains a favourite.

At the time, this design and build project was of substantial scale and value to Bachy Soletanche, which involved the challenge of constructing 60,000m3 of stormwater storage tank capacity in the form of two 36m diameter, 40m deep, and 1.5m thick diaphragm wall shafts using a combination of grab and hydrofraise rigs in an urban environment.

As Principal Contractor we were also responsible for delivering the bulk excavation; the reinforced concrete works including capping beams, base slabs, and roof slabs; and a 1.8m diameter tunnel to connect the two tanks.

Looking back, you could say the Blackpool Tanks project was an ancestor to the more recent Lee Tunnel and Thames Tideway projects, which have seen Bachy Soletanche push diaphragm wall shaft construction to a far greater scale than was experienced on this project.

The challenges we faced at Blackpool make the project even more memorable, from constructing 450m3 diaphragm wall panels, to the significant challenge of constructing the heavily reinforced concrete base slabs to each tank which were made complicated by water flowing from abandoned site investigation boreholes, and to the difficult task of constructing the tunnel in ground that was frozen by liquid nitrogen.

My responsibilities on this project provided me with invaluable knowledge, experience, and skills that I used to achieve my professional qualification to become a Chartered Civil Engineer and Member of the Institution of Civil Engineers, career achievements of which I am particularly proud.

The internationally recognised professional qualification and post-nominal letters “CEng MICE” illustrates a mark of excellence, demonstrates the benefit and reward of the professional development I achieved from working on the Blackpool Tanks project, and provides the inspiration to our next generation of ground engineering specialists to develop and succeed in their careers.

It would have been fascinating to have worked on the Metropolitan Railway between Paddington and Farringdon, as when completed in 1863 this was the first urban underground railway in the world and one that would develop into the London Underground “Tube” network.

The boldness and determination of the Victorian civil engineers to create imaginative engineering solutions using pioneering construction techniques would certainly have been a fantastic experience at the time. 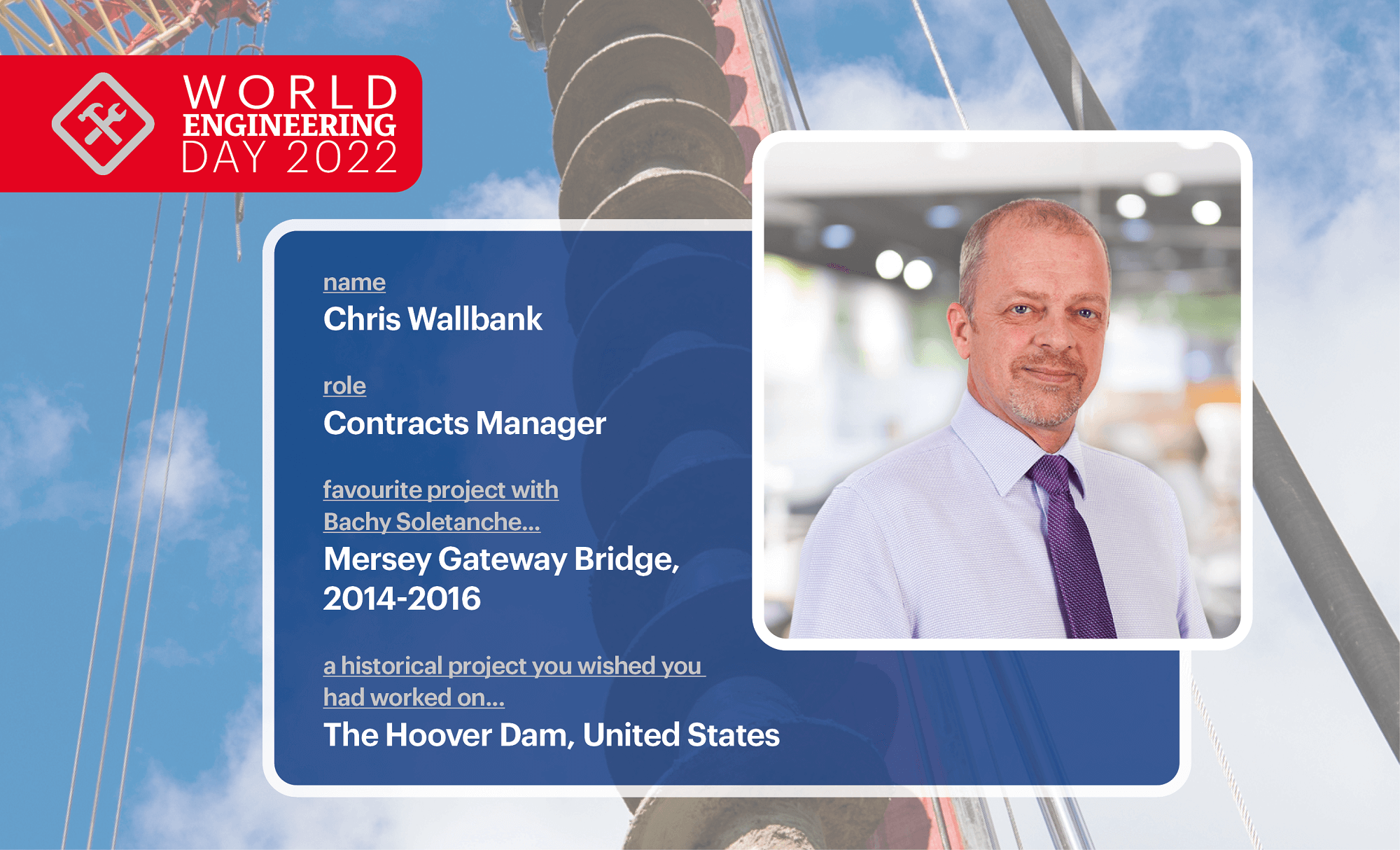 One of the most standout projects for me was working as Project Manager for the £600m Mersey Gateway Bridge project in Cheshire, from 2014-2016. We delivered an extensive programme of geotechnical works for this new six-lane bridge and despite the many challenges that arose, it was a successful project that we delivered on time and within budget. We installed over 900 piles, including CFA, LDA under bentonite fluid, rotary bored piling and cased secant piling for four cofferdams. Extensive pile load testing was also carried including two Osterberg bidirectional tests for the 50m deep abutment and pier piles.

As such a high-profile and large-scale project, we encountered numerous obstacles and had to work hard to minimise our impact on the surrounding environment and wildlife. We also had to mobilise a total of five rigs on the banks of the Mersey, which isn’t the easiest location to navigate! On top of this, we had the challenge of installing bentonite lines under the Astmoor Industrial Estate dual carriageway and bus lanes, as well as tankering bentonite to both the Manchester Ship Canal and Pier 15 at Astmoor due to a lack of access for bentonite lines in these locations. We were also faced with a 40-tonne weight limit over the Manchester Ship Canal swing bridge, which required a lot of logistical management to overcome.

Many impressive engineering projects have been carried out in modern times but the one project that stands out to me for its sheer scale is the Hoover Dam in the USA. Holding back the Colorado River, it has been generating power since 1936 and at its peak, employed 5000 construction workers to construct the dam using 2.5 million cubic meters of concrete.

Using basic machinery and manpower, it took 6 years to construct the enormous structure with a height of 221m, length of 379m and width at the base of 200m. It was estimated that a single continuous pour of concrete would take 125 years to cool, so the dam was built by pouring concrete in numerous blocks. Building the dam was extremely expensive as well. The budget of the dam in 1931 was about $49 million, the equivalent of about $680 million today. Today, it’s a popular tourist attraction visited by over 1 million people annually. 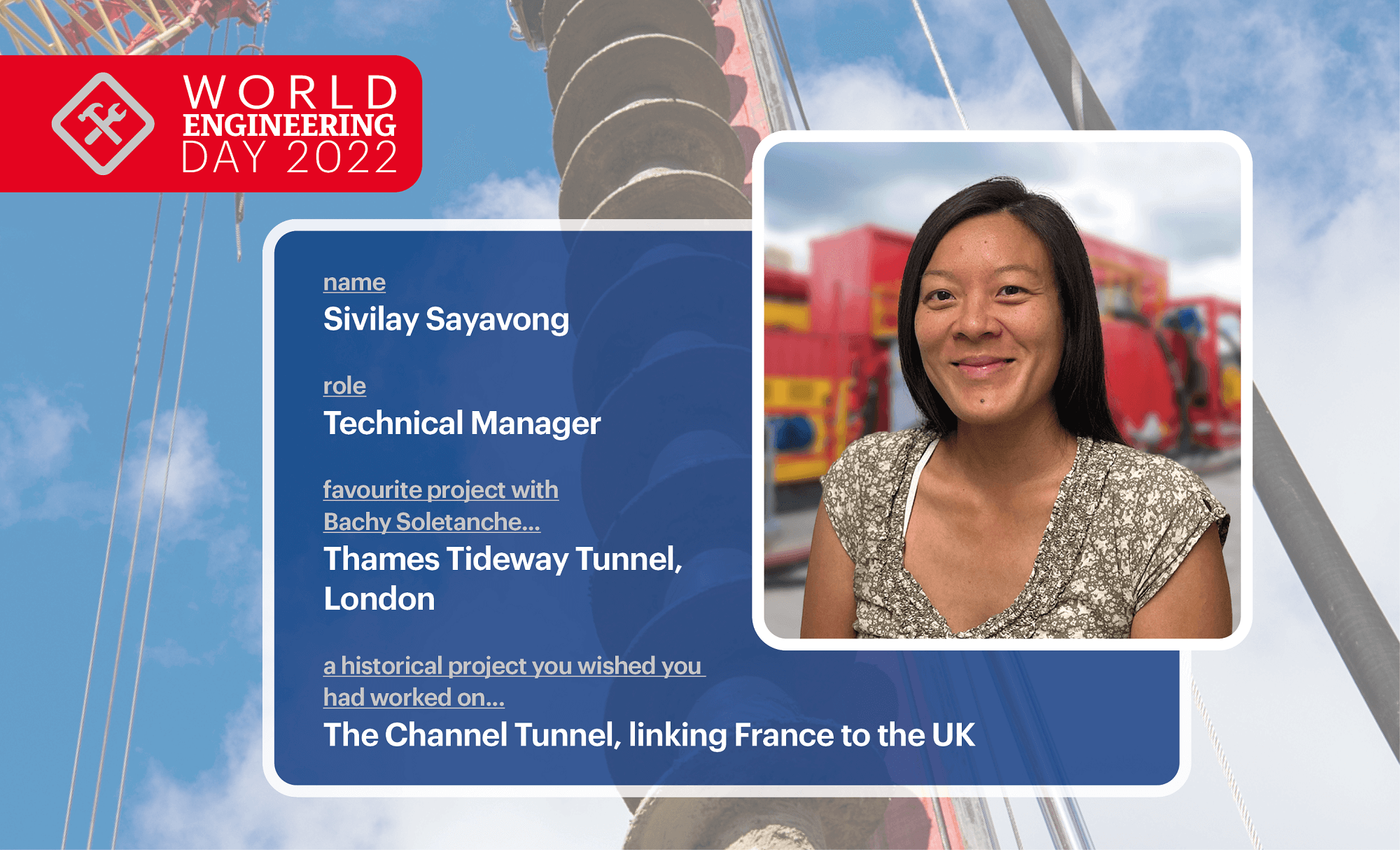 My favourite project is by far the Thames Tideway Tunnel where I have worked as Design Coordinator since 2016. This has been a meaningful project for which all parties share the same goal: to transform London’s sewer system and reduce pollution of the River Thames.

What has made it even more enjoyable is that everyone, including the project manager, contractor, and designers, are truly working in collaboration. From a geotechnical perspective, this is a project in which we have had the opportunity of showcasing our large palette of technical skills to our partners, including diaphragm walls, cased CFA and CFA piling, rotary bored piling, jet grouting, permeation grouting and minipiling. By being given all of this responsibility, we really felt trusted by the client and for that reason it has been a pleasure to be part of this fabulous project.

It would be The Channel Tunnel (1988-1994) because it is physically linking France to the UK. I believe if this tunnel did not exist then the UK would not have attracted so many French people (like myself), to live and work in the country.

Find out more about our team